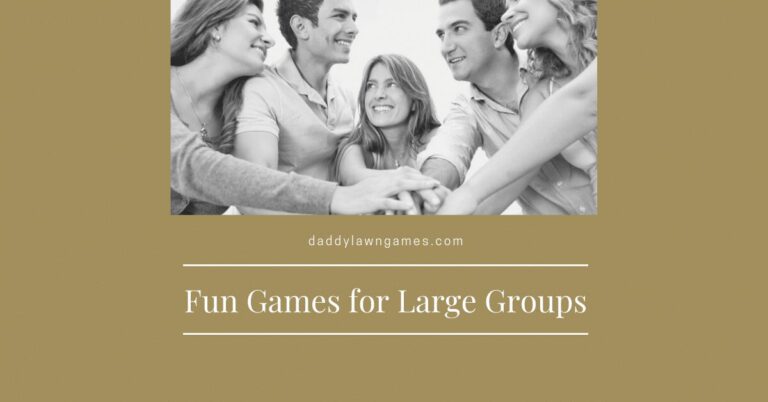 Have a large group like a family party, corporate event or birthday? Consider these fun games for large groups at your next event.

React, and Act is the perfect fun game for large groups. It involves a lot of guessing, acting, laughter and fun.

For the React and Act game, everybody is asked to write down suggestions of varied situations. For example:

The suggestions are placed into a hat for people to pick randomly. Whatever a participant chooses, he or she must explain what is written without talking, instead of using gestures and other sounds like laughing or crying, while others try to figure out what situation he is reacting to. Set a limit for 1 minute maximum per turn. The winner is the one who guesses the most situation correctly!

Alternatively, you can just play classic charades. In charades, just like React and Act, players in large groups can be divided up into teams, and the team who guesses the most charades correctly wins.

To play, just like React and Act, have a bunch of various charades written down on paper and put in a hat to randomly pick from. The only difference is that a charade is any “word”, unlike React and Act, which requires “situations”.

If you didn’t play this as a child, that’s a shame because Musical Chairs was so much fun at barbecues and birthday parties. If you aren’t fast or attentive, you don’t stand a chance.

To play this game, place a circle of chairs and ask people to dance or walk around the chairs. Make sure the number of chairs is 1 less than the number of dancers. When the music stops, everyone scrambles for a chair, and the one that doesn’t get a chair is out of the game. Next, remove one chair and start the music again and begin the whole process all over!

This game is one of the best ways to start conversations at a campfire or a social gathering. Don’t worry about an icebreaker; people would naturally get to know each other during the game.

In this game, everyone is expected to make more than one statement. It could be two or more. One of the statements has to be a lie, while the other one is the truth.

Every other individual then has to figure which is statement is true and which isn’t. It is a fun way to get to know someone, especially when certain of the statements are real facts.

Much like the musical chairs, this game requires alertness and quick movement. As the host, you’ll need to play music and ask everyone to dance. However, when the music stops, everyone has to freeze. Whoever freezes last leaves the game. Make sure that one person is a judge and that he or she doesn’t play.

This is like baseball with slightly different rules. Basically, the game is played using 1 ball, 4 bases, and two teams. The pitcher rolls the ball, while the kicker kicks from behind the home plate. A kicker will need to run the bases and stop at a base or otherwise be called “out”.

If the base runner of a kicking team touches all four bases, without being called out, then a run is scored.

You can figure out all the rules for kickball here and then get everyone together for a rousing game.

There’s nothing like a water gun fight to liven up a large group of people. Equip everyone with a water gun, separate them into groups and let the war starts. Teams can target other teams and attack them with sprays of water from their water guns.

Click here for this game’s complete rules and variations.

7. Monkey in the Middle

This game is so much fun.

The game requires 3 or more players, with one standing in the centre while the others throw the ball to each other. As this goes on, the middle player will attempt to intercept the ball. The other players should sort of taunt the middle player, kind of throwing the ball close enough to the middle man to make it more sporting.

I think it can be more fun as the middle man, especially if you are more athletic than the other players who are throwing the ball to each other.

Watch this video for this game’s complete rules:

Group Trivia is just regular trivia with more people and teams. It’s bound to be more competitive and fun as groups have a better chance of getting answers than single players.

To spice things up, there could be consequences for teams that lose and a grand prize for the team that wins. To play this game, separate everyone into teams and ask random trivia questions. Make sure to have different themes, so you can divide the questions up. For example, US History, TV and Geography.

You can find 250 sample trivia questions here. Alternatively, you could buy the game Trivial Pursuit for tons of trivial questions.

Soccer is a perfect energetic game for large groups who aren’t afraid to get down and dirty. The teams don’t have to contain 11 players like a standard soccer team but they have to be complete on both sides. But make sure each team has a goalkeeper. You can also create a mini-goal post from soda bottles or other materials around.

This game creates so much fun at a large gathering of adults and children. Each team will “piggyback” up the game arena and back. It can be a regular piggyback race, but the piggyback blind race has a twist. The adults are blindfolded, while the kids aren’t and the kids have to lead the adult towards the prize. Click here for this game’s complete rules.

Scavenger hunts are a popular activity at kid’s parties but there is plenty you can do to take it to an adult level game or corporate event game.

Provide clues that are more challenging and will really test mental facilities. Make prizes valuable items like bottles of booze or gift cards. You can also put your guests into teams encouraging them to work together.

This sort of ‘Amazing Race’ scavenger hunt is sure to get their minds working.

Click here for this game’s complete rules and a bunch of fun variations on this popular large group game.

To play tug of war, members of your large group must divide themselves into two teams. Teams should be divided evenly according to body weight to keep things fair.

The members of the teams grab on to either side of a rope and pull in either direction. After a while, the strongest team will be able to pull the members of the other team down resulting in the losing team falling all over each other.

This sport encourages teams to work together to build a sense of trust. It’s also a fun activity both participants and onlookers will enjoy.

You can buy a tug of war rope on Amazon.

Telephone is a classic game that can be played inside and outside. To play, the players (any number of children) line up. An adult whispers a phrase to the first child in line. Then the child whispers what they heard. This continues until the last person in line gets the message. When they hear it, they say loud enough, for everyone to hear, what they heard. Then the original phrase is told. The funny part comes when the players see how different the two phrases are!

Click here for this game’s complete rules and a bunch of cool phrases to get started.

Three-legged races are a great way to promote a sense of teamwork and camaraderie.

To play our last fun games for large groups, your group will have to divide up into teams of two. The team members will stand side by side and tie their inner legs together. They will then try to reach the finish line in this uncomfortable state.

The team that reaches its goal first wins.