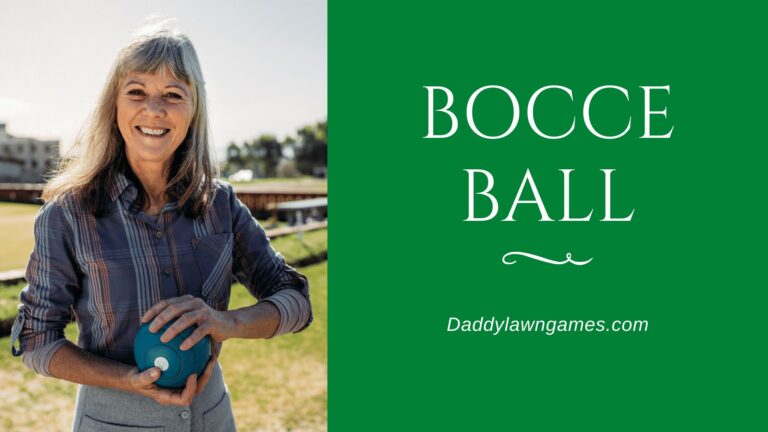 Are you looking for a safe, challenging and timeless family outdoor game? Look no further than bocce ball! Add a set to your backyard or your family vacay bag, and you’ll join millennia of bocce players – from children in the streets of Palestine to Greek clergy and Roman soldiers.

Why Is Bocce Ball So Popular?

Bocce ball is accessible to all ages and abilities, as it’s low impact, no contact and doesn’t require endurance. However, don’t be fooled, because while almost anyone can enjoy tossing a bocce ball, mastery is a satisfying feat. The mechanics are interesting, and the strategy is devilishly fun.

How To Play Bocce Ball

Two to eight players can join in the game, although 2 or 4 players is most common.

The rules of bocce are simple:

Pro tip: Be strategic! Take into consideration every option – you can try to get close to the pallino, knock another player’s bocce away from it, or knock the pallino itself—strategy, strategy, and strategy.

What To Look For In A Bocce Ball Set

So, you and your family want to get in on the action. But what kind of investment should you make in a bocce ball set? Luckily, with the rising popularity of bocce all over the world, you have options. Which set is best for your yard depends on who wants to play, where you want to play and how highly you value authenticity. Here are some key considerations when selecting the best set for you:

Regulation size bocce balls are 107mm in diameter, but there are several sizes on the market. The average backyard player uses smaller balls, as 107mm is a pretty hefty handful for kids or people with smaller hands. Kids and elderly folks may appreciate a ball as small as 74mm (we’ve included a smaller, lightweight option below). Even without kids to consider, if becoming a pro with the standardized size isn’t your priority, a 90mm or 100mm set might be a good middle-ground for a range of guests and slightly easier portability.

Regulation weight bocce balls are 920g or less. The heavier the ball, the more control you have. However, a lighter ball is easier to use for those with less strength (i.e. kids). While even ultra-lightweight options can be a good time, the game’s strategy changes with balls less than about 500g, as it becomes more challenging to knock each other’s bocce balls.

Professional bocce sets typically have 8 balls, with 4 balls of 1 colour and 4 balls of another. Each color of ball also has 2 balls with 1 engraved pattern and 2 balls with another (for teams of 2). This allows for 4 players to differentiate between their balls and can also be used to the advantage of the color blind. Sets designed for backyard fun often skip the engraving step and simply use 4 different colors. If you plan to play with 4 people, especially if those people are smaller humans who like colors and might not notice detailed designs, a cheaper set with 4 colours might be a good call. If you plan to play as a duo most of the time or keep it classy, 2 colors keep it simple.

Bocce balls come in a range of materials. Historically, bocce balls were carved of wood, which isn’t necessarily evenly weighted and are susceptible to rot and wear. More modern high-end sets are made of solid resin composites, which are both resilient and perfectly evenly weighted, but expensive. However, most common bocce sets, including those on our best value list below, are made with a rubber core with a resin exterior. The feel of a rubber core, resin-coated bocce is more than sufficient to the ordinary, amateur bocce player. While some bocce sets in this category use cheap resin pr1 to cracking, you’ll find some durable budget options on our list.

Less often, bocce craftsman and manufacturers use a range of other materials. Bocce volo is a variant of the game involving metal balls and overhand throws. These balls are difficult to source, and the game is less accessible to new players, with very few North American adopters.

If you plan to play bocce on a bocce court – a very flat surface – it is worthwhile to make evenly weighted bocce balls a priority. If you plan to play on uneven grass or beach sand anyways, the quality of the bocce ball matters less, as the bumps in the ground will thwart your precise maneuvers anyways. You can still have a great time, but a value pick is likely to do the trick.

A standard bocce ball set (including all those listed here) typically includes 8 bocce balls, 1 distinct pallino ball, a measuring tape or string and a carrying case. However, the included carrying cases aren’t exactly the highest quality. Even high-end bocce sets often have flimsy, frustrating cases. If you plan to keep your bocce set in 1 location, this likely isn’t a big factor. If you want to travel, you can either suffer with fiddly zippers and jiggling balls or simply replace the bag with a milk crate or similar bin. We will note the case quality on the below bocce ball best-of list, but we selected the sets assuming that the bocce ball quality and value were prioritised over case construction.

A Note on Weight

Bocce Ball sets are typically measured using grams and millimeters. A standard set is 920g and 107mm in diameter. For reference that’s just over 2lbs and 4.2 inches in diameter.

The Best Bocce Ball Sets You Can Buy On Amazon

This bocce set is a great value entry-level set into the real world of regulation bocce. These balls will feel substantial and are great for playing with adults and even practicing for recreational tournaments.

This bocce set is a step above most economy sets available. For the extra m1y, you’ll get a well-crafted, high-quality product that you can use for decades to come. Great for serious players or simply backyard bocce enthusiasts who want the best.

This bocce set is next level to any North American designed set. It comes with both incredibly precise Italian design and clout.

This is an affordable and versatile choice for families who want to use their bocce set in all different environments from a brand name for outdoor goods. Lightweight and easy-to-grip, this set is perfect for kids. However, the durability and substantial enough weight keep the game fun for adults as well.

The second Baden set on this list, this set boasts the quality and material of excellent regulation sets at an accessible size and weight. It is perfect for maintaining class and quality at a lighter weight.

While technically this game may not be “bocce ball” in the traditional sense, this fun play-anywhere game is well crafted and uniquely fun. Many bocce ball style games include foam balls or hacky sacks at exorbitant prices considering their value. This game, however, is reasonably priced, well-constructed and a fun option for young kids and indoor play. With cubes instead of balls, this version is also a fun option if you do not have access to flat ground as it can even be played on a hill.

Enjoyed this post? Be sure to check out our other easy favourite outdoor games here.