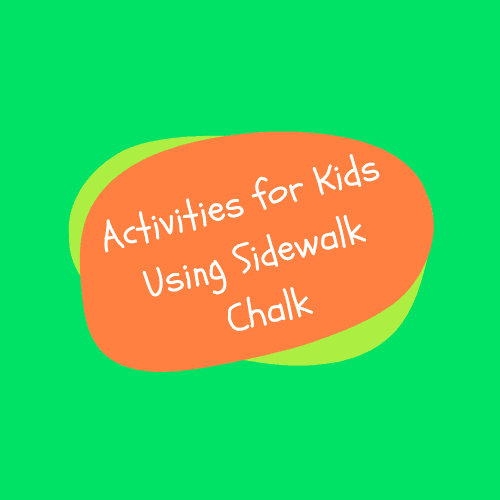 In the Covid-19 pandemic, schools are closed, and children continue their education at home using distance learning.  From a safety standpoint, this makes perfect sense; from a sanity standpoint, most parents are searching for fun, safe, activities for their kids to do while still adhering to social distancing guidelines.  Listed below are some great outdoor activities for kids using sidewalk chalk. You can also check out our guide about line markers for games using chalk.

While this is the most obvious use of sidewalk chalk, with many residents still at home your child’s fun activity will not only get them out of the house and enjoy a fun activity, they will create beautiful art the entire neighborhood can enjoy.

Hopscotch is a fun game that began as a training exercise for Roman soldiers that was adopted by Roman children and spread throughout Europe.  To play hopscotch, you will need sidewalk chalk and markers for each player, which can be rocks, buttons, or shells, etc.  Players will use the sidewalk chalk to draw a hopscotch pattern on the ground that includes at least eight numbered sections.

Getting Marked Out with Sidewalk Chalk

Considered to be one of the oldest games, marbles were played by many ancient civilizations, including the Romans, Egyptians, Greeks, and Native American Tribes.  The first marbles were created from stones, clay, glass, and some Romans played using nuts.  Today marbles are relatively inexpensive and can be purchased at many stores.  To play marbles, you will need a bag of marbles, at least one shooter marble (a marble that is larger than the other marbles), sidewalk chalk.

While many people play hangman inside on a piece of paper, you can easily bring the game outside and make it eco-friendly by using sidewalk chalk instead of wasting paper. To play, you will need sidewalk chalk and at least from 2-4 players.

Much like hangman, tic tac toe is traditionally an indoor game that is played using paper, but this is wasteful, and you can take the fun outdoors in the fresh air by using sidewalk chalk instead.  To play, you will need 2 players and sidewalk chalk.

Hit the Target is a fun game to play outside, and you only need sidewalk chalk and markers in the form of stones, chalk, buttons, etc.  You can decide how many players there will be and what the winning score will be.

For hours of outdoor fun, you can create your very own mini-golf course using sidewalk chalk.  To play, you will need sidewalk chalk, a golf club, and balls.  The size of your mini-golf course is only limited by your outdoor space and imagination.  You can choose as many players as you like making it fun for the entire family.

This fun game will allow players to have fun creating art but will put their fitness to the test as well.  Players can choose any obstacles they want and make the course as large as they want.  It is a fun game the whole family can play together, and all you need is different colors of sidewalk chalk.