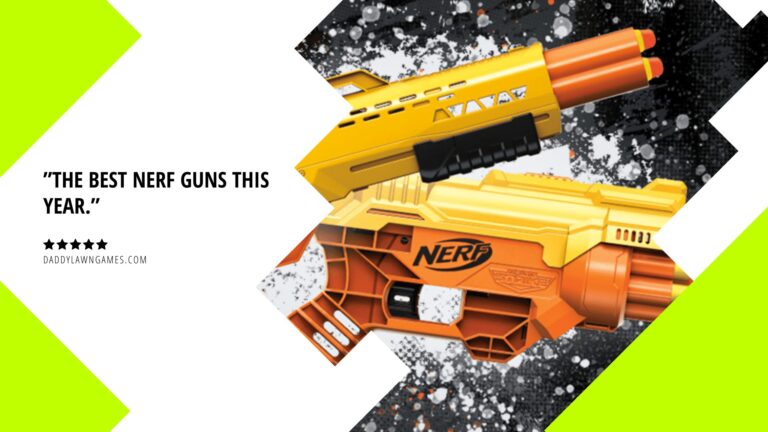 He ducks to dodge the rubber-tipped bullet flying from the far reaches of the basement. With a long leap over the carpet, he reaches the safety of the couch-cushion fortification—time to reload. There is a rustling from across the room. No time for more ammo, he peaks cautiously over the couch-cushion barricade and sees his opponent, having lost one sock in the intensity of it all, barreling towards him. Darts are exchanged in a fury of combative shouts.

Nerf guns have become an iconic American toy since they were in invented in 1969. A mark of childhood and sometimes manhood (and womanhood too). Their popularity has sparked vigorous innovation from the company, and a vast spread of exciting blaster styles and accessories are now available. This ain’t your dad’s Nerf. 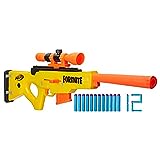 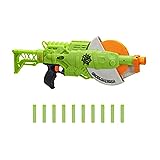 How We Decided On The Best Nerf Guns

What should you look for in a Nerf gun when you want to be armed and ready for serious fun? Let’s take a look at some key factors to take into consideration when making your next acquisition of Nerf: The fun-included artillery!

Darts are probably the most well known and the most common ammo. There are different sizes and styles of Nerf darts. Suction cup arrows are excellent for target practice, while rubber-tipped foam darts are ideal for general combat games and “mega” ultra-wide darts are fun for packing a bigger punch.

Disc blasters fire small, flat foam discs with a hole in the middle. They tend to be less accurate because they aren’t very arrow-dynamic (see what I did there?), but the latest series of Vortex Nerf guns have a thicker disc that is comparable to arrows in terms of accuracy. It’s also great fun to use discs themselves as target practice, like skeet shooting, since discs also take longer to fall to the ground and are slow enough to be caught by a higher speed arrow or dart.

Missile blasters are for next-level fun. They are larger darts with three fins that pack a punch. They can be accurate and longer-range but not the most versatile nor best choice for an indoor toy that won’t knock over grandma’s antique lamp. Their fins are also notorious for breaking, significantly reducing their potential for a precise shot.

If you are looking to mix it up, there are a series of crossbow-esque style guns/bows that fire Nerf arrows, as well.

While most blasters fire a single projectile at a time, some can shoot two or three simultaneously. The advantages to this are possibly similar to those of a real-life shotgun – more bullets mean a higher chance of hitting the target—also, a great wow factor. However, before springing for a multi-shot blaster, you may want to consider if it is worth multiplying the number of ammo pieces you need to pick up off the floor per shot.

Number of Rounds and Additional Storage

While some blasters have a fixed capacity, most Nerf dart guns have the option to upgrade your magazine or clip to allow you to hold more ammo. Aftermarket magazines can hold up to 22 darts; however, Nerf makes a 35 roll drum. If you want to keep your blaster lightweight and well balanced, a more modest attachment is recommended. There are also pockets available for purchase (or spare attachments with more ammo inside) if a few darts will not suffice.

Nerf guns that shoot balls can hold up to 100 foam balls. This allows for more complex games and longer rounds… and of course more complex, longer clean-up as well.

There are a few ways to store extra ammo. Some blasters use clip systems. Blasters with the CS or ECS systems can incorporate clips (they are attachments to the gun that hold extra darts). Alternatively, there are magazines. Magazines use a spring or other mechanism to push darts into the firing chamber between shots. They are ideal if you are interested in having lots of options for upgrading. Finally, there are drums. Drums are compatible with clip blasters and essentially fill the same role as a clip; however, their shape means that they can hold a lot of ammo without dangling too low.

A smaller blaster pistol allows manoeuvrability, is lighter for playing on the run, is easy to store and is often more affordable. Larger rifle models have more capabilities, are compatible with more upgrade options and are probably more fun to tote around. Although, they are of course more expensive.

The smallest Nerf gun is the “Jolt” is a mere 5.43 inches and perfect for pockets. The Nerf N-Strike Mega Mega Mastodon is the biggest Nerf gun you can buy.

Some Nerf guns are designed with special themes. For example, there is a Starwars line-up and a Fortnight series. The Assembler Gear series is designed to be highly customizable and resemble Avengers weaponry. Others, like the N-Strike and N-Strike Elite series are designed to mirror the functionality of real weapons and are often preferred by older users. Nerf RIVAL guns fires balls. Keep your eye out as new theme lines are likely to be unveiled in the future, as well.

Nerf guns range massively in accuracy. Typically longer Nerf guns, with a dart arrow at a higher price point will give you top accuracy. Smaller, slower blasters are less likely to be accurate, but that doesn’t make them less desirable for smaller, more casual settings. Some accessories can improve accuracy – notable are stands that offer stability and calibratable lasers that let shooters sight in their blasters before gameplay. Sights, if matched with Nerf guns of worthy quality, offer a chance to shoot with even more precision.

The distance that a Nerf gun can shoot varies. On one end of the spectrum is the N-Strike Elite Centurion which boasts a 100ft range. On the other end of the scale, small blasters might only shoot 30ft or so, but can still be great as a cheaper and lightweight close-up sneak attack option. In general, Nerf guns that shoot foam balls have a lower firing velocity and thus a substantially lower range than dart-style ammo, however, there are “high-impact” RIVAL blasters that shoot a yellow foam ball 100 feet per second, improving the range but upping the risk of property damage.

Just like real-life guns, there are options for how the ammo is loaded into the barrel of a Nerf gun. Some Nerf guns have pump-action on the top or bottom of the blaster. Others have lever-action loading mechanisms. Finally, some only require pulling the trigger. Trigger-action-only guns are more likely to require batteries.

Some Nerf models are “semi-automatic” meaning that they require batteries for added power or loading mechanisms. This certainly can add some extra pizazz and power, but might also be avoided in the name of keeping costs low and reducing the number of parts that might break.

Nerf Blasters that feature tactical rails (like the N-series) can be upgraded by sliding special attachments onto the gun including sights, folding scopes, lasers, lights, various shield designs, barrel extensions to improve accuracy, and shoulder stocks.

Our Top Picks For the Best Nerf Guns For 2023

Now that you are intrigued by the vast world of Nerf, here are some suggestions to get you started. These picks are all affordable and upgradable.

This just announced, brand new Mandalorian Nerf gun is amazing. Its a replica of the actual Amban Phase-Pulse Blaster used by Mando in the Disney+ tv show. It is even life size, measuring 50.25 inches. Not to mention, it includes a light-up scope, wood stock and a nifty cartridge loading mechanism! How cool is that? 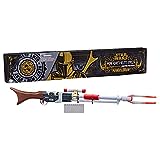 4. Top of the line for accuracy (great for playing with alone):

The Nerf N-Strike Modulus ECS-10 Blaster is a motorized, bolt action blaster in the acclaimed Accu-strike series, fully loaded with a scope and ten dart magazine and many options for further customization.

The Nerf Rival Phantom Corps Hades XVIII-6000 is pure fun with an integrated magazine holding 60 rounds of ball-style ammo that fires at 100 feet per second. If the price is out of your range, there are more affordable options with fewer features in the Nerf Rival series.

With the exact same design as the Fortnite sniper rifle, the BASR-L is a really cool bolt-action with a 6-dart clip and scope! Fortnight gamers will absolutely love this Nerf gun.

The Zombie Strike Ghoulgrinder Blaster is like the Gears of War Lancer chainsaw gun. It has a “grinder” at the end of the barrel that really moves when it shoots. The grinder moves with the 10-dart rotating wheel included in the stock. This particular weapon features a removable stock and various attachment points for customization with other Zombie Strike series gear.

Nerf has released a ton of really expensive toy guns over the years. Sadly, most of the historically most expensive Nerf products are unavailable for purchase anymore (except on eBay perhaps).

Nonetheless, the most expensive Nerf gun widely available for purchase in 2023 is the Nerf Elite Titan CS-50 Toy Blaster. This Nerf gun has a motorized 50-Dart Drum, a spinning barrel and comes with 50 darts. Beware, this one is so big that a child under 12 wont be able to hold it. 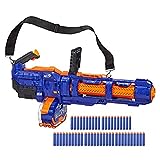 Happy blasting! Pow pow pow! Come back and check out our other toy reviews here.