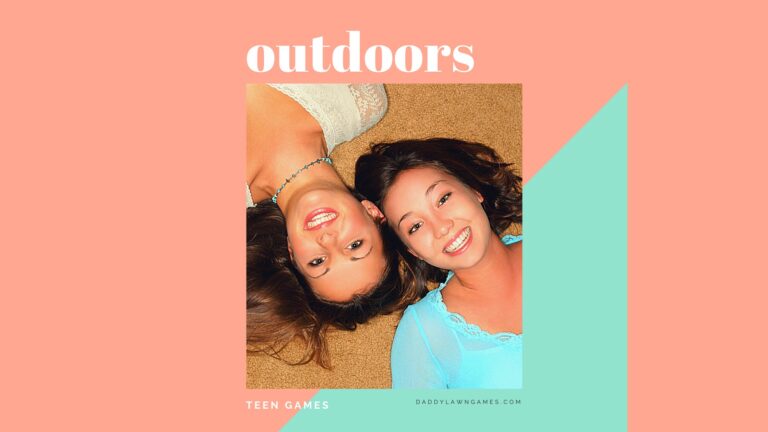 Need outdoor game ideas for teens? It is summer break, and there’s no better time to play the best outdoor games for teens than now!

You left for work and came back home only to meet your teens at the same spot: on the couch, playing games, or on their phones chatting away. But they loved playing outside when they much younger, right?

So, what changed? A lot, I guess. Nonetheless, you can still get your teens to play outside. You might ask, “How?” It’s simple. You need the best outdoor game ideas for teens!

We’ve put together some fun outdoor games your teens will love. Play these games and watch your kids put their video games and smartphones away.

Our Fave Outdoor Games for Teens:

Perhaps you rolled your eyes at the sight of “tag.” Here’s what you might not know: tag never gets old – even for teens.

Nevertheless, regular tags won’t cut it. You can’t expect teens to derive the same excitement from the same game they played all through pre-teen stages. For that reason, we suggest, blob tag.

What is blob tag?

Have you ever wondered why teens love multiplayer games? Are the games action-filled and adventurous? Maybe.

But, teenagers love video games because such games let them connect with their friends. And that’s why they spend hours playing them.

That prospect to connect with people is what blob tags offer. How? Once “it” tags you in blob tag, you don’t become the new “it.” Rather, you join “it” in the quest to tag other players. As such, your teens will be playing with “teammates” as they do online.

And that’s not all. The game proceeds and the blob expand until there is only one player left untagged: the winner. Afterwards, the blob disbands, and the game restarts.

What a fun twist on this classic outdoor game for teens!

If blob tag provides the “connection,” then sponge pass serves the fun stew. Why is sponge pass fun?

Kyle is 15, and like every other teenager his age, he loves his video games. Other than school, you’d hardly find him doing a thing outside his smartphone or PlayStation. There’s also one thing though Kyle loves: sports.

Many teens are like Kyle; they admire sports and derive pleasure from a team’s show of strength and skills. It is a good thing that sponge pass is similar to team sports games.

How to play sponge pass

Sponge pass is one of the coolest outdoor games for teenagers. To play, line your teenagers up in two separate teams, and instruct them to face each other. At the start of each line, place a sponge and a pail of water. Also, set up an empty pail at the end of the lines.

Next, choose an initiation word (such as “on your mark”). At the sound of the initiation word, teammates soak their sponge in water and then pass the sponge along the line to drain the water inside the empty pail. The first team to empty their pail of water, or fill the empty jug with water WINS.

Check out this video for this outdoor game for teens in action to see how sponge pass is played.

Don’t be afraid; you need not spend an extra dime on purchasing sardines (the canned fish). On second thought, you may need to get some for your teens to satisfy their nutrition needs after playing this fun teen game.

Here’s what that implies:

One of your teens hides while his or her peers seek. The fun part lies when one of the so-called peers sees the hider.

Rather than alerting the hideout of other players, he joins the hider. As more people then find the hideout, they also participate until there’s only a person left seeking.

There’s one other rule, though: hideouts must be discreet and large enough to fit 90% of the players of the game. Often, the hideouts get pretty stuffy for players, almost like the sardines in their canned containers.

If your teens like sponge pass, they’ll love Dodgeball too. After all, this is one of the most famous outdoor game for teens!

Teenagers generally love fast-paced physical activities. This is why soccer is a favourite in gym class, while yoga is not. Not to mention, it’s better for the endorphins when such activities make them sweat.

To that end, Dodgeball improves both physical and psychological being. And that is why it is one of the best outdoor games for teens.

In regard to physical exercise, dodge ball is a great workout through the “5 Ds”. The 5 Ds stands for dodge, duck, dip, dive, and deek.

Besides, do you know that Dodgeball is an international sport? The opportunity to feature on YouTube globally is a thing your teens won’t turn down. Best case scenario, it could a big lift for their social lives.

So, how do you play dodge ball?

Line up your teens into two teams. The objective of this game is for players to hit their opponents while avoiding being hit. You can read the full dodgeball rules here.

You can buy a dodgeball on Amazon for cheap.

You can read this post to learn how to set up line markers in your yard or the park.

Ultimate Frisbee is an easy outdoor game for teens that doesn’t require much else other than a big yard or park and a Frisbee (which is inexpensive and readily available).

Ultimate Frisbee is a great game because its fast, team-oriented, requires fun moves, and most people know the rules.

How to play ultimate frisbee? Check out the rules straight from the official source, USA Ultimate, which we simplified for this post:

1. The Field: A rectangular shape with end zones at each end.

2. Starting Play: Each point begins with both teams lining up on the front of opposite end zone lines. The defense throws the disc to the offense.

3. Scoring: Each time the offense catches a pass in the defense’s end zone, the offense scores a point. The teams switch direction after every goal, and the next point begins with a new pull by the team that just scored.

4. Movement of the Disc: The disc may be advanced in any direction by completing a pass to a teammate. Players may not walk or run with the disc. The person with the disc has ten seconds to throw the disc.

5. Change of Possession: When a pass is not completed (e.g. out of bounds, drop, block, interception, stalled), the defense immediately takes possession of the disc and becomes the offense.

You can buy a frisbee on Amazon for cheap.

Get started with these outdoor games for teens and let us know which game your teen enjoyed the most. Good luck.

Your teens’ are bored of the outside? Get them to watch the whole MCU timeline (all 20+ films)!