The License Plate Game is a great way to alleviate boredom during long road trips.

A road trip makes for a great vacation option. It’s budget-friendly (especially when travelling with a couple of kids), and it’s a terrific way to explore the country.

But let’s face it, after hours in the car, impatience and boredom can set in making the vacation experience anything but fun. It is for this reason that you will want to come up with plenty of things to do during long hours in the car.

Movies, radio and streaming music or podcasts will only go so far, so you also want to be prepared with stimulating games you can play with the kids. The license plate game foots the bill.

If you are planning a long road trip, here is all you need to get a lively license plate game going in your vehicle.

Checklist: In order to play the license plate game, each player in the car should have a pen and pencil ready. Note: you can also play on teams. If this is the case, you will only need one paper and pencil set per team.

Next, it’s a good idea to have a printed list of every state in the United States. That way, you can cross off states as you spot the license plates for that state.

If you are not in the United States when playing, you can look for license plates from different countries or regions within that country. If you are traveling to a foreign country, you will want to familiarize yourself with their license plate system beforehand.

To keep things simple, we will explain the game as if it’s being played in the United States.

How to Play The License Plate Game

The goal of the game is to spot license plates from as many different states as possible.

Before playing, it’s a good idea to determine how long the game will last. When you consider that you are looking for fifty states, you may not be surprised to find out how difficult it will be to find every one. Finding an Alaska plate is exceptionally rare.

It is for this reason that the license plate game can last your entire road trip. However, if you think you’ll get bored before then, you can set the game to end after an hour, after a particular leg of the trip, after a day or after any amount of time you think is best.

Once you have established your timeline, start looking for cars. When you see a car that has a license plate from a state that has not yet been called, shout it out. Then make a marking on your paper next to that state, so you know the state has been called, and you know which team called it.

The license plate game does not necessarily have to be competitive. You can make it a group effort so that everyone in the car works to cross off the states.

On the other hand, you can make it enjoyable by setting players or teams against each other. If you choose this route, there are a couple of ways to set up the scoring. Here are some suggestions:

The second option will keep the game livelier as you are not just noting the license plates that have not been checked off. Instead, you will be noting every license plate you see.

Twist: a blogger made a map of the USA giving each state a specific number of points based on license pate rarity: Link.

Obviously, the team with the most points wins the game.

You can also make cooperative games interesting by keeping track of how many points you scored in one game and trying to beat that score when you play the next day.

The license plate game is a great way to keep boredom at bay during long trips in the car, but that’s not the only benefit it offers. It’s also a great geography lesson.

If you are in the United States, the states will be embedded in your mind for some time to come. If you are traveling through a foreign country, this is a terrific way to learn more about the areas of the region you’re in. To make the game even more educational, have discussions about the different areas while searching for your next license plate find.

And, of course, if you’re ever on Jeopardy and need to come up with some license plate trivia… you got that question down!

You can purchase this cool reusable license plate game on Amazon, flipping the states along your route. This wooden game board actually comes with states that flip up and down to score, and all the states are attached so you don’t have to worry about losing any of them! 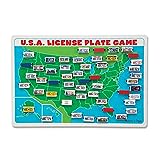 The license plate game is a lot of fun, but once you get bored with that one, you will need to find more games to keep you occupied. Here are some other fun ones to add to the list.

While You Were Sleeping: This game takes place when one passenger falls asleep. While they are sleeping, the other passengers create a story. Each takes turns, adding to the story. When the passenger wakes up, you must try to convince them that the story actually happened while they were asleep.

21 Questions: For this game, one passenger thinks of something; it can be a person, place, thing or any noun. The other passengers get to ask 21 questions to try to determine what that person is thinking of.

Alphabetical Categories: To play this game, you have to come up with a category. The category can be bands, foods, cars or whatever you wish. Then the passengers have to go through the alphabet coming up with things that fit in that category.

The Name Game: To play the name game, one person in the car must name a celebrity. The next person names a celebrity whose first name starts with the same first initial as the previously named celebrity’s last name. For instance, if the first celebrity named was Brad Pitt, the second player might chime in with Penelope Cruz. Then another player might say Charlie Sheen, and so on and so forth.

Name That Tune: This is an oldie but a goodie. To play, one passenger says, “I can name that tune in five notes” (or however many notes he thinks he will need to figure out the song). The other player must then hum the notes of the song that player has requested. If the first player is unable to guess the song he is singing, he can request more notes but players should come up with a cap to determine when a player is no longer eligible to make a guess.

Cows on My Side: If you are on a road trip, it’s likely you will see a lot of cows. Make it interesting by playing the ‘cows on my side’ game. For the game, every time you see a cow on your side of the car, you must shout out, “cows on my side”. If there is a cow on the other side of the car, you can shout out “cows on your side”. If you shout this before the person on that side of the car does, you will steal their point. If you pass a cemetery and shout “ghost cow” first, you can steal all of your opponent’s points.

Road trips are a lot of fun, but you need something to relieve boredom during long hours in the car. The license plate game is just one of the many games you can play to keep from going crazy. Which of these is your favorite?